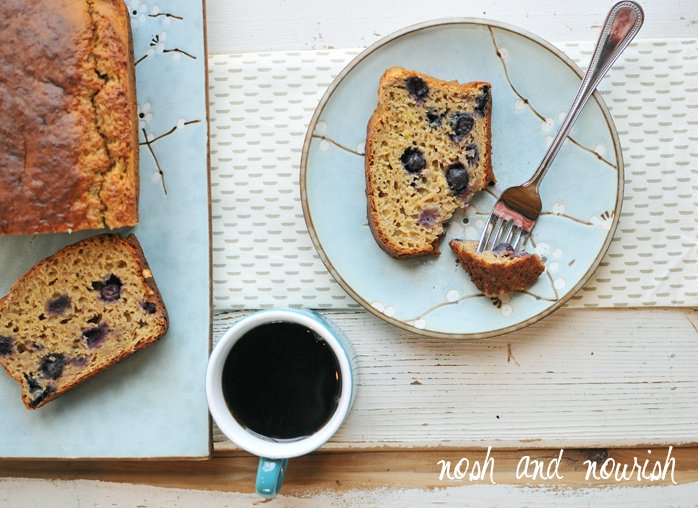 Last night we had friends over for dinner.  While that might not sound like a big deal to you, to us... to me and my veggie-hating-hubby, it was a big deal.  We were fairly hermit-y before Babycakes, but now that she's arrived we are even more so.  I told Babycakes we were having friends over and she said, "no momma... back" because she thought we were leaving her.  She didn't understand that people could come over to OUR house for a meal.  Ha!  I told you we were hermit-y!  Our friends that came over are having their own baby in just a couple weeks, so we wanted to make sure to see them one last time before the little bambino arrives!  I wasn't sure if my friend was having any aversions to food, so I suggested BREAKFAST for dinner.  I mean really, who doesn't love breakfast?!?!??

Of course I really just wanted an excuse to try this Greek Yogurt Blueberry Banana Bread :)

I served organic bisquits and gravy made with all natural pork sausage from our local market, with a side of scrambled eggs, and a slice (or two... or three) of the blueberry bread for dessert.  It was all delicious, and I received multiple thank yous from everyone, including Dear Hubby.  (And a few "num num"s from Babycakes).

This was inspired by the original recipe posted here, with a few tweaks by yours truly to reduce the sugar content, and a few extra adjustments suggested by my friend Rebekah (who is a much better mile-high baker than I am!).

First I gathered my ingredients: It was a little too lumpy for my liking, so I gave it a quick stir with my Immersion Stick Blender: Then, I folded in the dry ingredients and thawed frozen blueberries: I poured the mixture into a greased loaf pan and baked it for an hour: Let it cool for 10 minutes (if you can stand it!!) before slicing it. Then, as my dad would say: "Diggeth, inneth!!" Don't you just love this new photo of the bread (taken almost 2 years after the original post!):