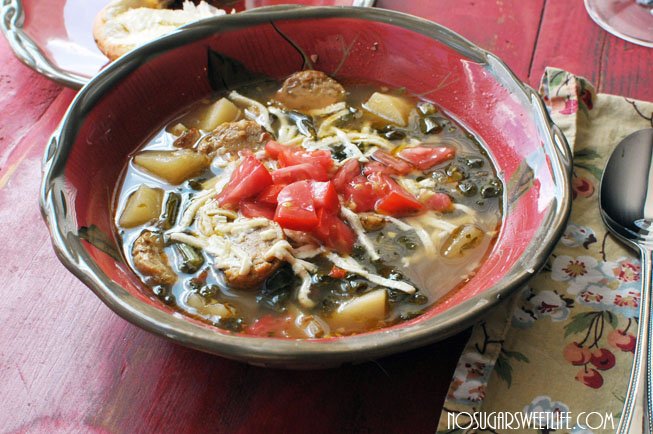 I really have to laugh at myself for this one.  I was so excited about my new plan: to cook more vegetarian meals to help Dear Hubby get more vegetables and less animal fats/proteins per the doctor's orders!  I went to the market and bought a bunch of weird new foods (ha!) - cheese that's not really cheese, meat that's not really meat, and a whole host of new veggies and fruit to stock my fridge.  I thought long and hard about what my first vegetarian meal would be that I would present to Dear Hubby, ceremoniously.  And it all went really well.  The meal was delicious.  And I plastered all over the interwebs (FB, Twitter) that I had made an amazing vegan meal...until I realized that one of the main ingredients I used was chicken broth! So I'm calling my soup "mostly" vegan :)  For those of you who are strictly following a vegan or vegetarian diet, just make sure you use a vegetable broth or vegetarian "chickin" broth as a substitute!  I promise, I'll get the hang of this sooner than later. This soup was inspired by Dear Hubby's favorite at Olive Garden, which is loaded with REAL Italian sausage, bacon, and cream.  But this was a wonderful, much healthier, but still super flavorful substitute.  For those not following a vegan diet, you can add 1 Tbsp of half and half or cream directly into your individual bowl for a bit of pizazz.  Dear Hubby said he loved it and would definitely eat this again and again!  And each bowl/serving has a full CUP of kale in it! This soup was entirely too photogenic.

I couldn't stop taking pretty pictures of it! I topped mine with special non-dairy Daiya shredded cheese and diced tomatoes from our garden. I was surprised at how good it tasted and how it actually melted into the soup!