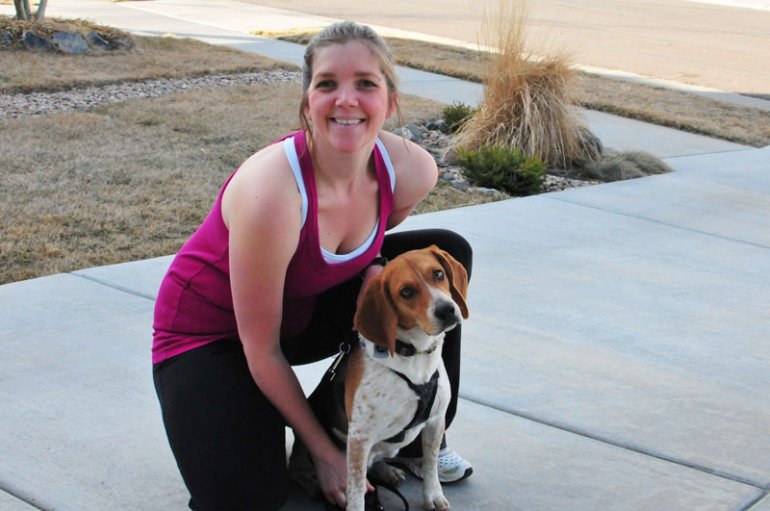 AWESOME NEWS:  my plan to run with doggie last night was a SUCCESS!!!  Woot Woot!  It was a beautiful evening out, warm but not too warm, and it felt good to move.  I had been anticipating the run all day, was a bit nervous to fail... but once I got out there, it came back to me.  I once trained for and ran a 10K (in 73 min - not super fast, but I ran the whole way)... but that was literally 10 years ago.

Here's a pic of my alternate running partner: Chloe.  She's my 2 year old Beagle (that I got while I was preggo... note: not a smart idea!).  I love her to pieces.  She's super cute, but crazy energetic and a total puppy still!!  I had planned on taking Bella, but Dear Hubby had already taken them on a walk, so Bella was too tired.

I've started the Pooch to 5K plan.  Tonight's scheduled run was intervals of 1 minute of running followed by 1.5 minutes of brisk walking... for a total of 20.  I planned a loop through the neighborhood to end at the park where Hubby & Babycakes would be playing.  I wasn't sure the timing / distance was right, but it turned out to be perfect!  I did a total of 23 minutes.  Chloe was a good partner.  It was her first run ever.  She's quite the sprinter though!!  I was having to hold her back almost the entire time, during both the walking and jogging parts.  I think she'll get the hang of it though.

It was a perfect night to start running!

I feel good: mentally and physically.  It was such a nice feeling running up the final hill to the park and seeing Babycakes coming down the slide!   This momma did something good for herself!!  And if I'm honest, this momma did a LOT of good things for herself today, including a lot of COLORFUL food!

As dreamed about last night, I started the morning with an omlette full of red peppers, spinach, red pepper & asiago chicken sausage, tomatoes, and a dollop of cream cheese.  It was delicious! For lunch, I went to my favorite organic foods cafe nearby my work.   I was originally leaning towards the lamb gyro advertised as a daily special.  But once I saw the kale "power salad", I knew I had to start with that.   I then piled on bell peppers, edamame, mandarin oranges, and roasted pumpkin seeds... and added a side of lowfat cottage cheese and water.

It all looked so beautiful and healthy. (SEE?!?!?) And again, to be REALLY honest... it was a bit "too healthy" tasting... ha!  I had to add a bit of extra honey mustard dressing and use a knife to cut the kale into smaller (more palatable) pieces.  So it was good, but I probably would've liked it better on a spinach salad base.  Not a Kale fail, but not my favorite either.  Close-up: For snacks I had:  a cup of green tea, a Vitamin Water Zero (rise flavor), and a handful of almonds.

After my pooch run, Dear Hubby grilled steaks for us.  His was served with mashed potatoes.  Mine was served with sliced red pepper (can I overdose on peppers?!?!?) and the end of the edamame hummus.  I also ate some leftover black beans.  Kindof a random combo, but it all tasted really good! How did your day stack up?  Did you workout?  What did you eat for dinner?