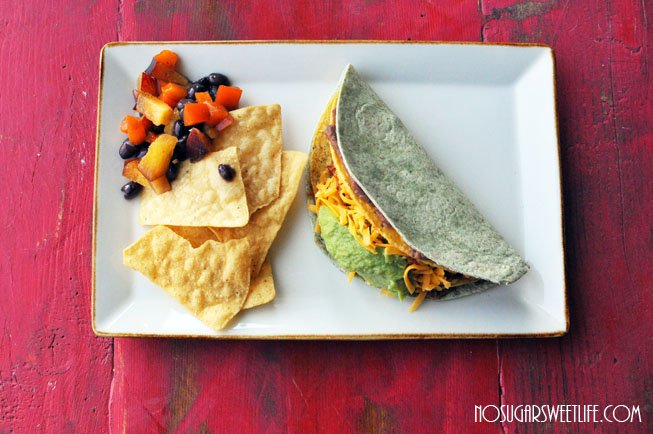 We don't frequent Taco Bell, and as I mentioned in this post, Dear Hubby doesn't really like Mexican food.  But he LOVES their double decker tacos.  Crunchy layered goodness! So when brainstorming my next vegetarian meal attempt, these came to mind.  I saw the MorningStar Farms' Crumbles at Walmart and put them right into the basket.  These would be my base.  I bought a bunch of other veggies that I thought I could easily disguise, like a frozen veggie combo pack of corn, black beans, red peppers, and onions and a bag of fresh broccoli "slaw" (without any sauce).  I made sure I got home early enough to do all my cooking ahead of time so he didn't see what was going IN to these tacos.  It would be my little secret!

Let me just start by saying these were Dear Hubby approved, praised, and finished.  Every. Bite. Gone. I can almost guarantee this was the most veggies he's eaten in one meal..ever. Never had a double decker taco? Though a few more calories than just eating a corn shell, the experience is so vastly improved that it's worth it.  Everything stays together. Nothing cracks or falls apart. You get the extra beans (fiber/protein) right there in the taco.  It's a win win. Here's a close-up of the taco "meat."  I really can't say enough about how perfect it all was!  You can even see some of the purple cabbage from the broccoli slaw :) And the best part, again, was that Dear Hubby liked it and finished it.  Mission accomplished!

PS. I only pureed the tomatoes because Dear Hubby doesn't traditionally like them.  You could just dice yours instead!

Have a great weekend & see you Monday!